The mainstay of my presentation material this year has been my deck on continuous integration, Docker and Jenkins. For people who have not had the chance to see this presentation or have seen it and wanted to get some more context around it, I have written this first in a series of posts. Much, in fact just about all of the material in this post features in other posts on my blog. The aim of this set of posts is to present the material in a more digestible manner for people who might not be fully fully familiar with Docker and Jenkins.

This first post will cover an introduction to Jenkins and use of the “Sidecar pattern” for deploying DACPACs to. Subsequent posts will expand on this to include:

Many people in the SQL Server community have displayed a great interest in containers, only to be left scratching their heads thinking “Well, that is nice, but what can I practically use them for ?”. In my humble opinion, spinning up SQL Server inside a container as a deployment target for a continuous integration pipeline, is one of the, if not the best ways to leverage SQL Server and Docker.

This simple picture represents the most basic of continuous integration pipelines at a conceptual level, and the question is, how can we make this better ?. What leaps out is the fact that instead of using a dedicated SQL Server instance, the deployment target can be spun up as a container. This is what is colloquially referred to as “The sidecar pattern” for using containers.

DACFx – data tier application framework to give it its full name, is the engine that underpins visual studio when a database project is deployed. This provides three functions:

For the purposes of this post, we will focus on the use of DACFx for the deployment of DACPAC files via sqlpackage.exe. A DACPAC file encapsulates database objects and a BACPAC encapsulates database objects and data. The most important thing to note is that DACPACs are declarative by nature, meaning that when a DACPAC is published, DACFx will ensure that the end state of the database it is published to reflects the state of the schema as encapsulated by the DACPAC (or BACPAC for that matter).

DACPAC creation requires that msbuild with SQL Server as a target is installed, one way of doing this is to install visual studio with the tooling for Data storage and processing:

msbuild requires a SQL Server data tools project in order to produce a DACPAC, the easiest way to do this is to create a project of the type SQL Server in visual studio and then import an existing database schema into the project.

To utilise msbuild within a Jenkins pipeline, the msbuild must be installed and configured via the “Global Tool Configuration” section:

Jenkins is free, it is portable by virtue of the fact it will run anywhere where Java will run. Wherever you run it, it is a first class citizen, unlike TFS, it does not lag behind VSTS for functionality. It has fantastic third party plugin support, if you can think of anything that has traction in the developer community, the chances are that a Jenkins plugin exists for it. Also it supports rich and mature pipeline as code, this is the ability to specify a continuous integration pipeline in Groovy script, of which there are two flavors:

“Declarative Pipeline” is opinionated in that it is extremely rigid in the way it enforces developers to code the pipeline, however, it is also very easy to pick up and leads to pipeline code that is highly readable.

The Real Power Of Jenkins Pipeline As Code

Continuous integration pipeline-as-code is highly recommended, and there is a feature that makes this particularly powerful. This is the ability to store the pipeline code in a repository along with the source code that the pipeline will build, deploy and test. To do this we need to specify that the source of the pipeline script is a source code management (SCM) system:

This is an example of a repo that contains a Jenkinsfile: 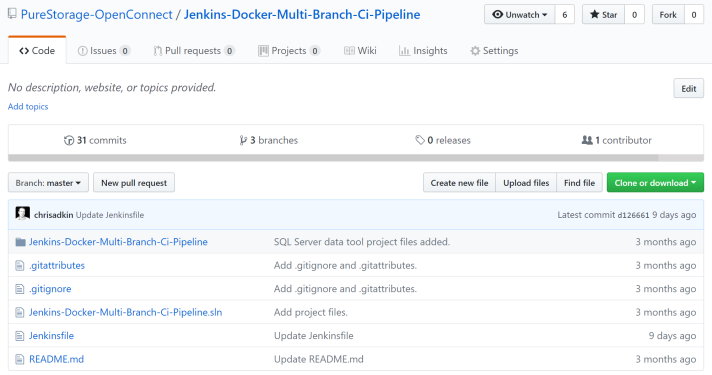 If you intend to use Jenkins pipeline-as-code stored in a GitHub repo in anger, it is recommended that you use a paid-for GitHub subscription, otherwise you will find that when your pipeline makes calls to GitHub. The pipeline may fail due to throttling. I have used the GitHub account for the company I work for in this instance in order to get around this.

Pipeline 1: Deploying To A Sidecar Container

Our very first CI pipeline will perform the following functions:

This is the pipeline code used to achieve this:

The method StartContainer is used to spin up the container, note that the container name is hard coded as SqlLinux with a hard coded external port on the host of 15556, we also have methods for deploying the DACPAC to the container and removing the container. The rest of the script from the pipeline keyword down is as follows:

Points Of Interest In The Body Of The Pipeline Script

All being well when the initial build is performed, something that looks like the following should be visible:

This is absolutely fine, all the way up to the point when we want to dig into the logging information associated with this:

All the information we want to see as to what Jenkins is doing under the covers is there, the problem is that sifting through this can be a pain. Luckily help is at hand in the form of the new “Blue ocean” pipeline GUI:

The blue ocean gui allows us to click on any stage of the pipeline, observe the steps associated with that stage and then drill down into the logging associated with a specific step. This also comes with the added bonus that is has the look and feel of a piece of software actually produced in the 21st century !!!.

In the next post in the series I will expand upon this example to cover multi branch pipelines.

2 thoughts on “My 2018 SQL Server, Docker and Jenkins Presentation In Blog Form, Part I”