Most CPUs as we know them are based on the “Von Neumann architecture”:

The CPU registers are the smallest and fastest part of the memory hierarchy on the CPU die and are 64 bytes in width. Since the Pentium 5 circa 1997, Intel has developed special instructions and registers which allow multiple data items to be processed simultaneously by single instructions, the generic term for this is Single Instruction Multiple Data.

SIMD Where We Have Come From

The following image is taken from the Intel White Paper: “The Significance of SIMD, SSE and AVX”:

SIMD Where We Are Going: The Future AVX

Why Is AVX Important ?

Simply put, the wider the register, the more data items we can process per CPU clock cycle and 256/512 bit AVX registers give us more bang for our buck than 128 bit SSE 2 registers.

Evidence of the use of SIMD in SQL Server 2016 CTP 2 can be found in the
de-compression element of a column store scan:

The _m128i on the last line highlighted is documented here:

This indicates that the batch engine is using streaming SIMD extensions 2 instructions. The query this stack trace is from involved purely integer data, in order to see if AVX instructions can be used I need to switch to my other test server which has Sandybridge based Xeon processors and use floating point data. Here is how I created this test data: 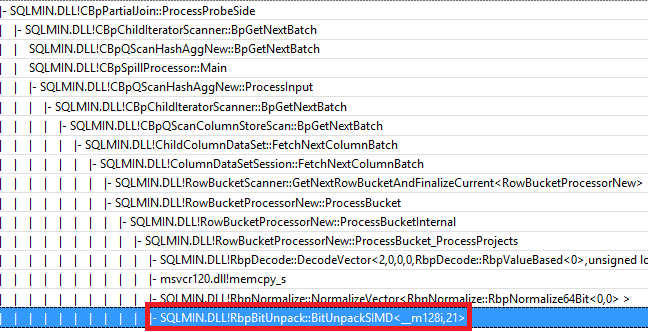 From what I can see the SQL Server development team have coded to a SIMD register and instruction set that harks back to 2000.

AVX comes of age with the Haswell process which supports AVX2, this has integer registers and a much richer instruction set, without either Microsoft coming out in public and announcing that they are leveraging AVX2 or having access to a machine with Haswell processors on which to test this, there is no way of knowing (until such time) that Microsoft are using this.

This is how the test data is created:

and this is the test query:

I have found that enabling hyper-threading and disabling adjacent cache line resulted in the lowest elapsed time for the query above, lets give this a try for both version of the database engine, first with a warm then cold column store object pool: 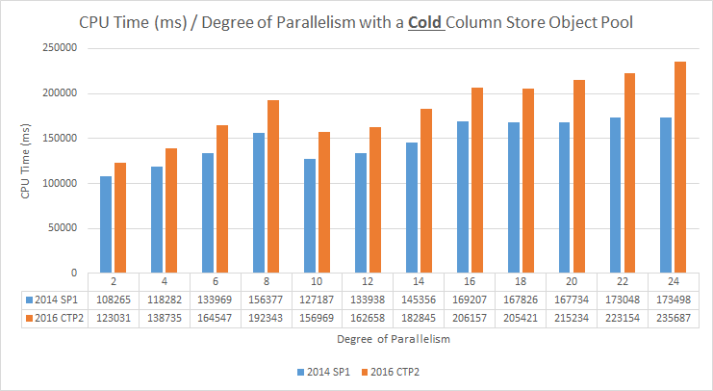 There are two different ways of interpreting CPU utilization, something is burning up more CPU cycles because:

These are the most CPU intensive modules captured in an ETW trace of the test query with a DOP of 24 on SQL Server 2014 SP1:

sqlmin.dll encapsulates the database engine runtime and storage engine, lets drill down into where the time is going in this module:

as before here are the most CPU intensive functions:

Note the line for the function RdpBitUnpack::BitUnpackSIMD, my suspicion is that this replaces what CpbBatch::ConvertByteArrayToSelectionVector does in SQL Server 2014, these two call stack excerpts support this hunch: 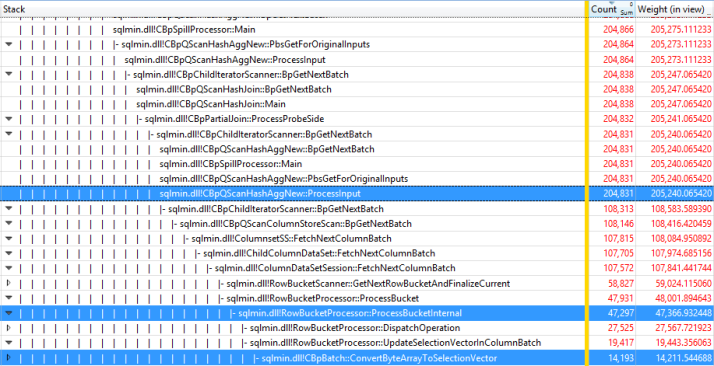 The fact that 15,599 sampled calls to the SIMD function are captured compared to 14,162 calls to CpbBatch::ConvertByteArrayToSelectionVector suggests there might be a bug in SQL Server 2016. Put another way, if we are unpacking a vector (batch) using 128 bit wide registers why are we doing this 15,599 (sampled) times when doing this with a 64 bit register incurs 14,162 sampled calls to CpbBatch::ConvertByteArrayToSelectionVector ?.

Takeaways, What Have We Learned ?

One thought on “Under The Hood Of The Batch Engine: SIMD With SQL Server 2016 CTP 2”