In this post I would like to dig deeper into the NUMA awareness of the SQL Server batch engine. Firstly, can we infer anything from the SQL OS method calls with ‘NUMA’ in their name, based on this stack trace excerpt from my single socket laptop, the answer is an emphatic ‘No’:

I therefore turned my attention to different methods for disproving / proving NUMA awareness in the batch engine.

How Data Is Delivered Into The Column Store Object Pool

The column store object pool stores BLOB pages contiguously as per this except from the white paper “Enhancements To SQL Server Column Stores“:

Each object is stored contiguously on adjacent memory pages. This simplifies and speeds up scanning of a column because there are no “page breaks” to worry about.

This creates the best possible conditions for the CPU memory pre-fetcher to do its job and in doing so ensure that expensive trips are to main memory are minimized.

Before I dive any deeper into my investigation as to whether or not the batch engine is NUMA aware, lets take a step back and look at the NUMA aware behavior we want to see for OLTP applications: 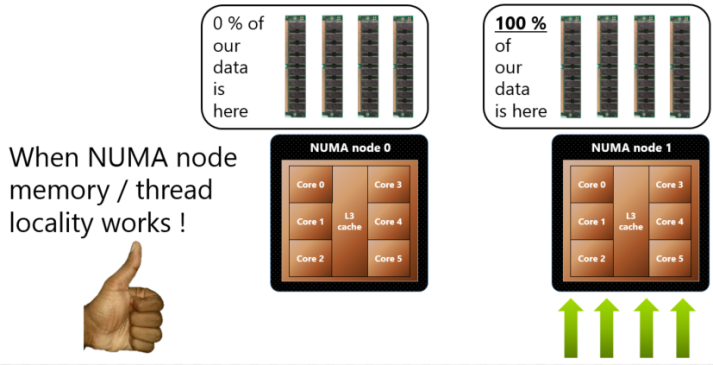 and this is want we don’t want to see: 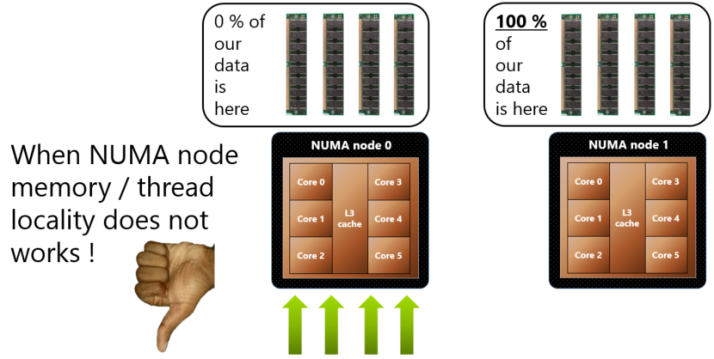 SQL OS is a completely different beast when it comes to scheduling threads for parallel queries, the CSS Engineers blog post “NUMA Connection Affinity and Parallel Queries” is recommended reading on the subject, note this excerpt which comes from the blog post:

If the DOP for the query can be satisfied by a single node the ideal node (most workers, schedulers and memory available at the time the query is started) is selected.  The controlling worker can be on a different node than the ideal.  For example you could have NUMA port affinity established for NODE 1 but the parallel query executes on NODE 4 because 4 was the ideal node.   This is not a problem because the majority of the work is done by the parallel workers which are located together on a node.

“Available memory” is referred to but there is nothing which mentions thread and NUMA node local memory affinity.

Knobs and Dials For Controlling and Leveraging NUMA

This Is All Very Good, But Is My Server NUMA Aware ?

Which Logical Processors Belong To Which NUMA Node ?

With hyper-threading disabled the relationship between physical CPU cores and logical processors is 1:1 and this is what we see in task manager:

Enabling hyper-threading results in the operating system seeing two logical processors per physical CPU core, changing what we see in task manager to:

If we create a column store that can fit inside each CPU socket’s bank of memory and run a simple query in which we ‘Warm’ the column store object pool on one CPU socket: 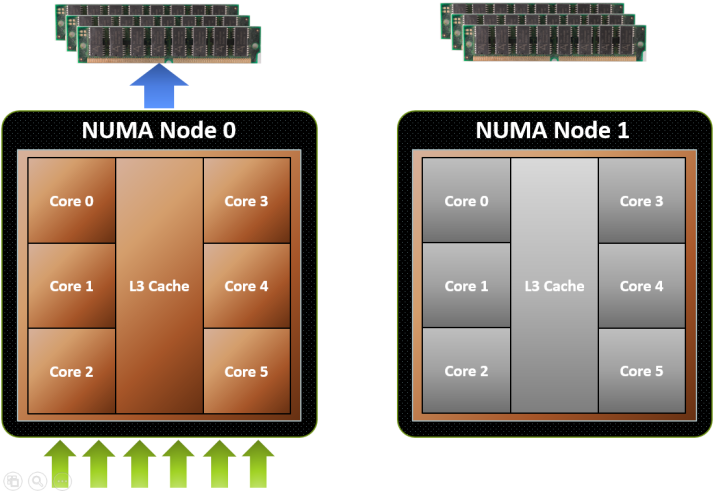 and then run the same query against the second CPU socket (using the CPU affinity mask to make each socket available/unavailable):

Unfortunately there is nothing I can see which exposes remote and local node memory access statistics for the column store object pool, at least not in SQL Server 2014.

My test server is a Dell T5500 precision work station with:

Our test query uses the DimDate table from the AdeventureWorksDW database:

Here are the results of this test, first if the column store object pool is warmed on node 0, then the CPU affinity mask altered such that the query runs on node 1, this is what we get:

Out of curiosity I tried this from the opposite direction by warming the column store on node 1 and then changing the CPU affinity mask such that all the query worker threads   ran on node 0:

Remembering that there is an additional overhead in accessing memory on a foreign NUMA node, this implies that a significant proportion (if not all) of the pages belonging to the column store are stored in NUMA node 0’s local memory. Given free reign to schedule worker threads as it sees fit and an instance on which no other sessions are running, where will SQL OS elect to schedule the worker threads ?. With the CPU affinity mask set to its default, all the worker threads run on NUMA node 0 when the query is ran for the first time:

when the query is ran for a second time, NUMA node 1 is now used: 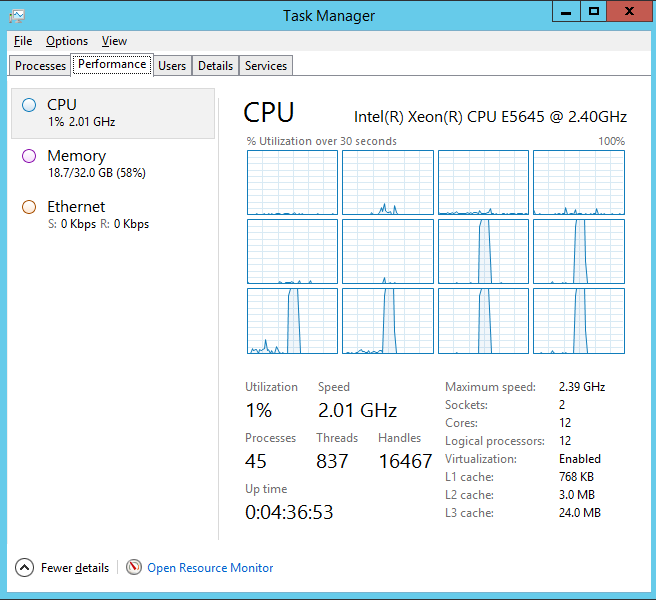 Every subsequent time the query is ran, SQL OS will use a different NUMA node.

I would like to thank Joe Chang for giving me a nudge in the right direction when investigating this.

Batch Hash Joins and “Cache Out”

Most people will be familiar the penalty paid when an iterator (hash join, sort etc) spills out of memory and into tempdb, “Cache out” is the generic term for spilling out of the various caches and memory as we travel from the CPU to storage: 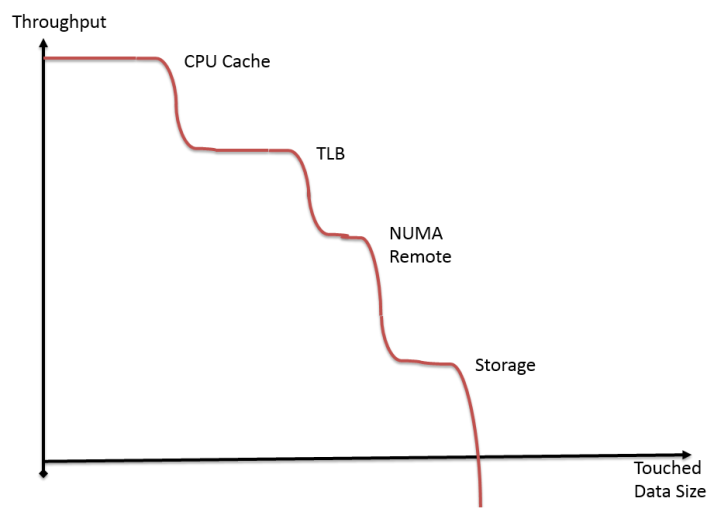 This is the way the batch engine performs hash joins according to a reliable source:

The size of the dimension table being joined to the column store fact can be increased up to the point that level 3 cache out takes place, causing the number of CPU cycles per row for the hash join iterator should jump up, there are several key points to take away here:

SQL Server 2014 provides an extended event which allows the CPU cycles per row to be captured for the hash aggregate iterator:

This is great but I want to capture CPU utilization statistics for the straight hash join iterator also. Herein lies the problem with the standard SQL Server tooling, you are limited by what the SQL Server development team at Microsoft wish to expose. If the public symbols are available for the release of SQL Server you are using, CPU utilization across the entire database engine can be captured and explored in windows performance analyzer.

This blog post should appear in the not too distant future, I hope you have enjoyed reading this one.

3 thoughts on “Under The Hood Of The Batch Engine: NUMA Support Part 2”