XPerf comes as part of the windows performance tool kit and it makes use of the Event Tracing for Windows framework. To sum this tool up at a very high level, it provides the means of capturing stack trace and performance related statistics on the operating system all the way down to the kernel. For me, the main selling point of XPerf is its ability to obtain stack traces. There is a plethora of good material on Microsoft technet about how to get started with XPerf, therefore I will not attempt replicate this information. I will, however, endeavor to put forward the case as to why you might want to use XPerf.

You will most probably ask; why would I want to use XPerf when SQL Server provides a vast array of instrumentation options in the form of perfmon counters, dynamic management views and extended events, the simple answer to this is that none of these tools provide:

“Used to synchronize child dataset access to the parent dataset during parallel operations.”

This is obviously something to do with parallel execution, but what exactly ?, using XPerf we can obtain a stack trace of where we hit the latch, and then walk the stack backwards ( image courtesy of Thomes Kejser ): 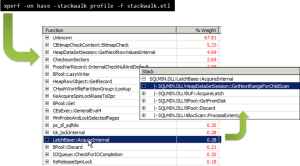 SQLMIN:DLL!HeapDataSetSession::GetNextRangeForChildScan hints that this latch might be associated with the parallel page supplier, the specific problem being that child threads are waiting to be served with pages ranges when a parallel table scan is taking place. In this specific example, the resolution was to partition the table as this has the effect of creating one parallel page supplier per partition.

I cannot think of any other tool which would allow this information to be captured. Extended events can be used to create stack traces, Paul Randal has an excellent blog post on how to do this over at the SQL Skills web site, however this approach will only result in a stack trace for the event that triggered the stack trace in the first place. If you want the entire picture of what is taking place on your server, XPerf remains the definitive way to go.